The scent of Rosemary always reminds me of my mother's cooking, she had a deep love and appreciation for cooking with herbs and this was one of her favorites. Here are photographs of a sprig of flowering Rosemary.
Medicinally, Rosemary is a very significant herb, it has been historically used to improve circulation and memory. It is also  known for its strength in supporting the adrenals, reducing stressful feelings,  and for improving circulation in joints. It makes a great essential oil to add to blends for warm soaks and massage oils. It may be employed in blends for depression, grief, and for raising one's spirits. It is also known for its abilities to relieve respiratory congestion. It is used in many hair products for cleansing the scalp.
The strength of this herb lies in its long thin dark  leaves. This is a plant that loves the sun, as it is heat tolerant. It is best to harvest the leaves of the plant after the dew has dried in the early morning during the hottest time of the year. At this time the oil of the plant is at its peak. It takes approximately 50-100 kgs to make one kg of oil!
It is a masculine herb that is associated with the sun and the element of fire. Rosemary is symbolic of health, love, and cleansing. It has also been a symbol of fidelity and devotion between lovers. Rosemary also has a history of being included in ritual as it has a cleansing property. It may open the third eye.
In Greek and Roman temples branches of this herb were often burned to invoke the gods and goddesses and eliminate unwanted energies. It was often made into garlands to be worn during festivities.
During my essential oil training this year, I learned that this essential oil is warming in nature and works with the Lungs, Liver, Gallbladder and Kidneys in the paradigm of Chinese medicine. 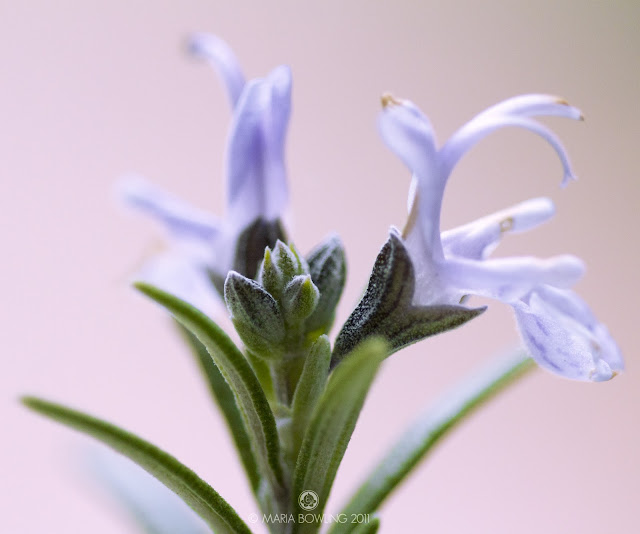 I am now reading  The Scent of Desire,  Discovering Our Enigmatic Sense of Smell by Rachel Herz, PH.D.  I love her methodical and specific research into the realm of scent. She writes about psychology, human emotion, taste, memory, and healing. 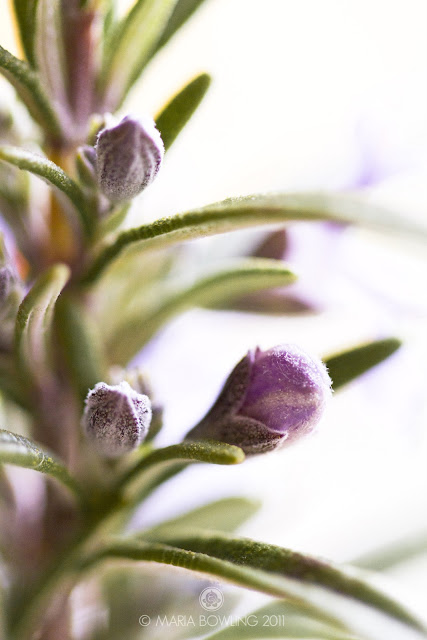 This is a photograph of Rosemary flower buds.
Posted by Maria Bowling DACM, L.Ac., SEP, Diplomate of Oriental Medicine at Thursday, November 10, 2011