A Love of Magnolias

Each new magnolia flower that I photograph is making my heart sing with delight. It is hard to not fall in love with a magnolia tree in full bloom! The flowers are quite delicate and vary in color depending on the species. 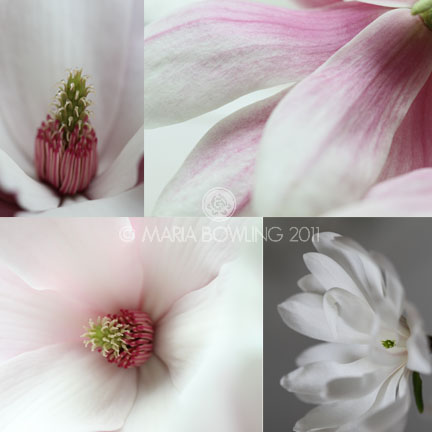 In Chinese herbal medicine, magnolia bark is known as Huo Po or Cortex Magnoliae Officinalis. In the Materia Medica it falls under  the category of aromatic herbs that transform dampness. 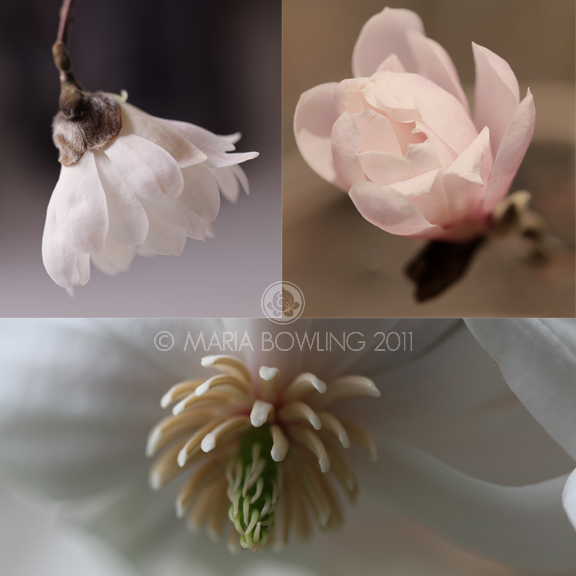 When combined with other herbs in medicinal formulas it has the function of warming and transforming, it also moves rebellious qi downwards when there is congestion that has arisen from the stagnation and accumulation of excessive dampness in the Spleen and Stomach. 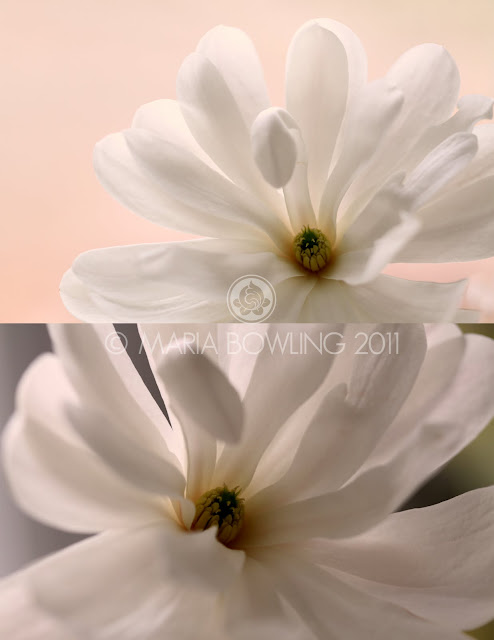 Today was a very special and magical day! The sky was so clear and blue, and the air was delicious and crisp. Nature seemed to promise a shift in the weather with the blessing of warm golden sunshine after so much dampness and gray skies. Everything seemed to sparkle and feel new again. From an early morning visit from a rather large magic white rabbit (yes, it's real!) eating forsythia flowers on Hog Creek Road, a lovely outdoor luncheon in the dunes at Lazy Point, to finally..... a two headed daffodil found in the garden by the front door. We often have to see things to believe them so here is the proof! 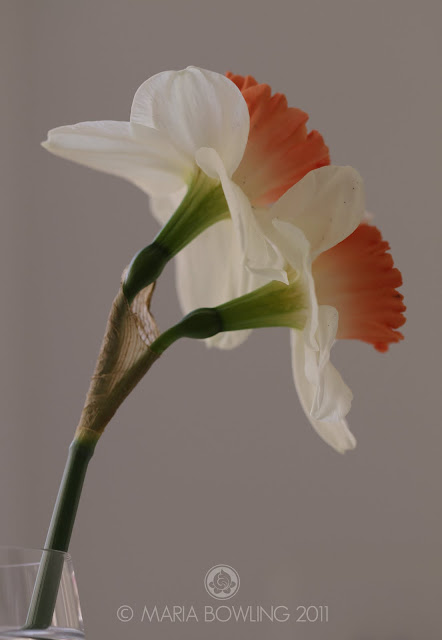 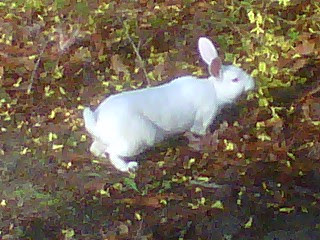 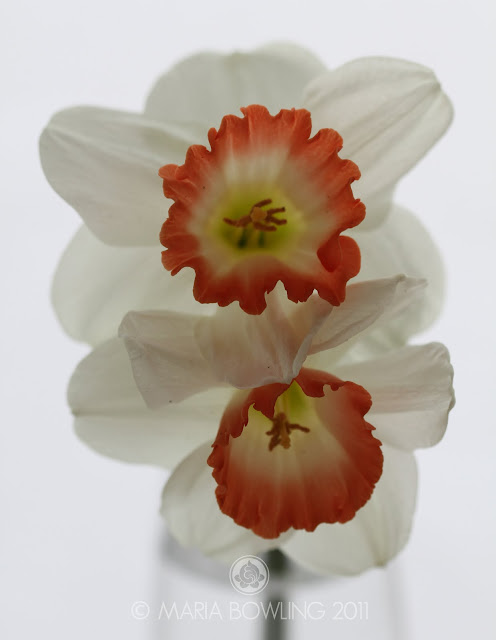 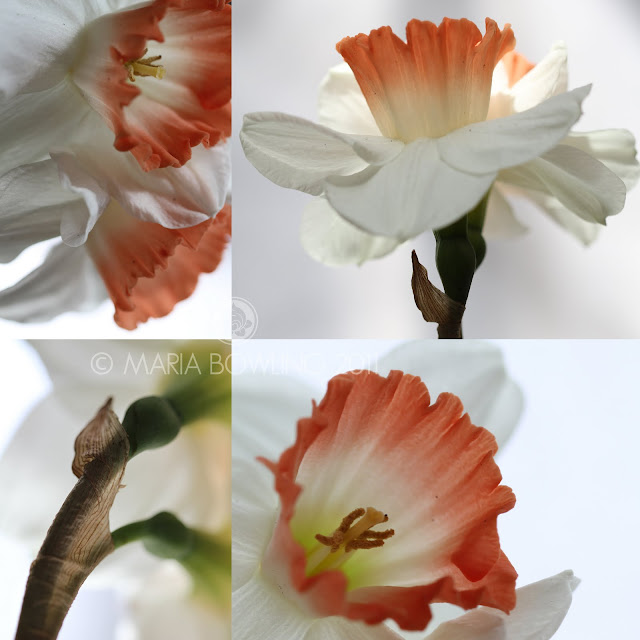 I have never seen so many bees enjoying the garden in front of my office! This bee was pollinating  the flowers of the Skimmia Japonica bushes. These bushes have very colorful red berries that are grown by the female plants. One male Skimmia can pollinate six females! The flowers are very fragrant and emit a very sweet and fresh scent. In fact, I have been sitting next to the bushes, every free moment to enjoy this natural perfume. 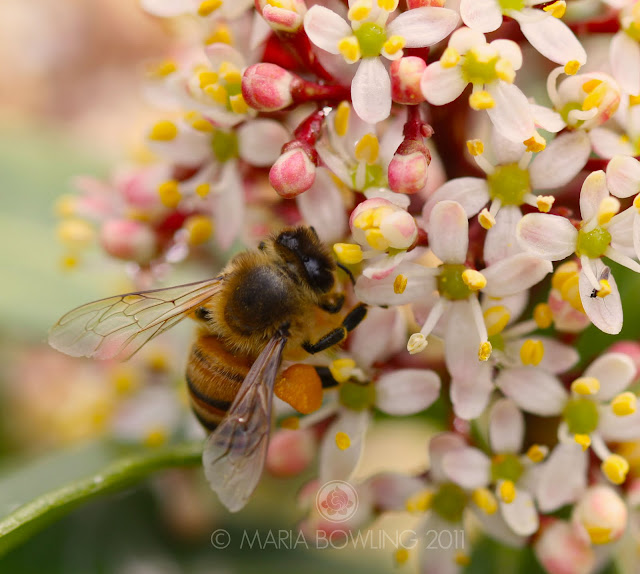 The flowers are teeny tiny, but so delicate and beautiful!
Posted by Maria Bowling DACM, L.Ac., SEP, Diplomate of Oriental Medicine at Monday, April 25, 2011 1 comment:

In celebration of Earth Day, I am honoring two of my favorite beings on the planet, ferns and whales. 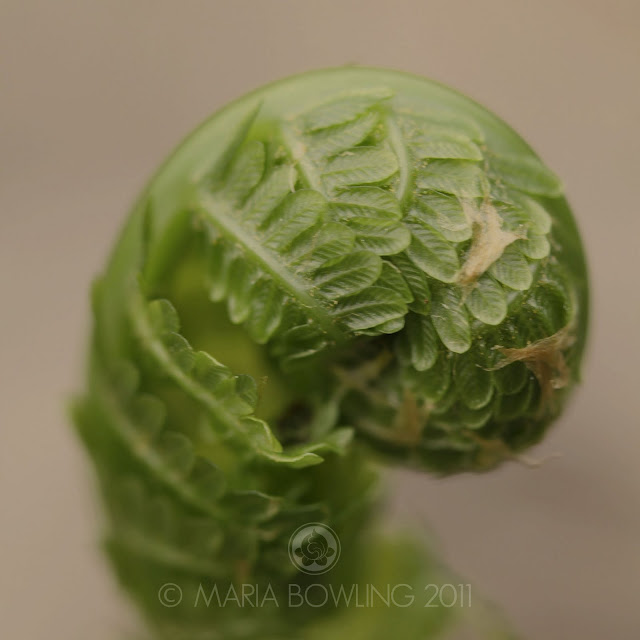 Ferns are believed to date back to over 360 million years ago. They are members of the botanical group known as Pteridophyta and there are approximately 11,000 species. One of the features of ferns that make them unique is that they propagate by spores, these spores can be found on the undersides of the leaves. This fern from my garden, is an Ostrich fern also known as Metteuccia struthicpteris. 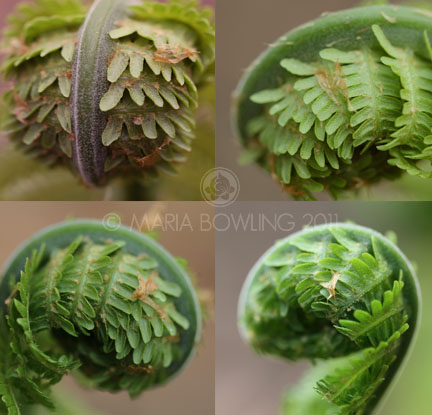 There is an old belief that ferns, if planted around one's home,  protect the abode and its inhabitants. 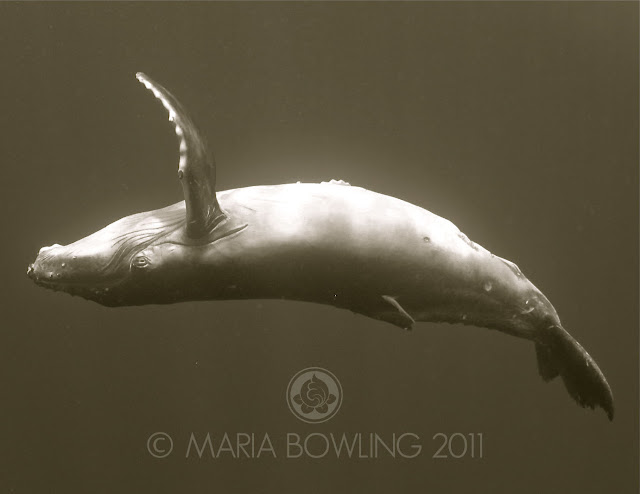 While the evolution of whales still remains a mystery, there are fossils of what are believed to be their predecessors that date back 52 million years. These mysterious creatures are believed to have originated on land and slowly adapted to the ocean over time. Many indigenous cultures believe that whales are the memory keepers of the planet. 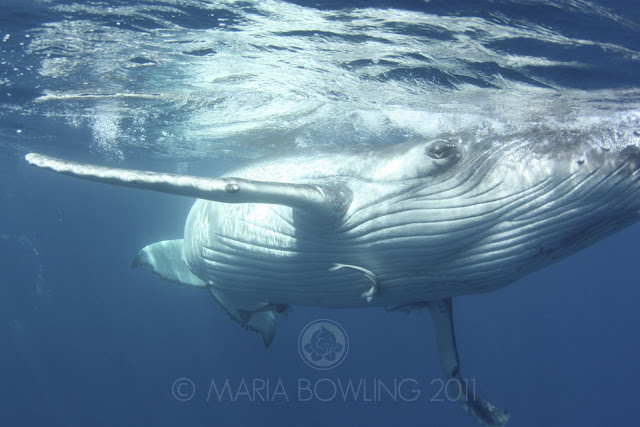 I took these pictures of a playful humpback calf (Megaptera novaengliae) in the waters off the island of Vava'u, in the Kingdom of Tonga. It was a magical day.

Queen of the Day

This magnificent pink magnolia flower came from the one and only bud on the tree this Spring. She emits the most intoxicating scent, she is indeed a queen. 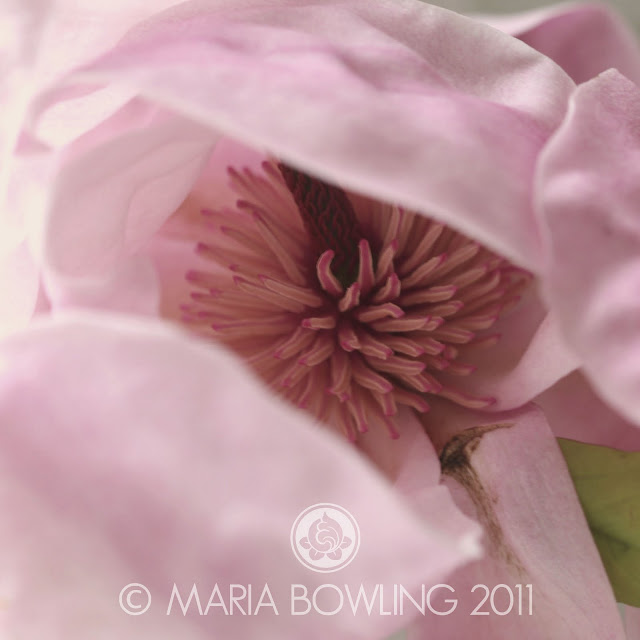 Magnolia is said to bring fidelity in love. 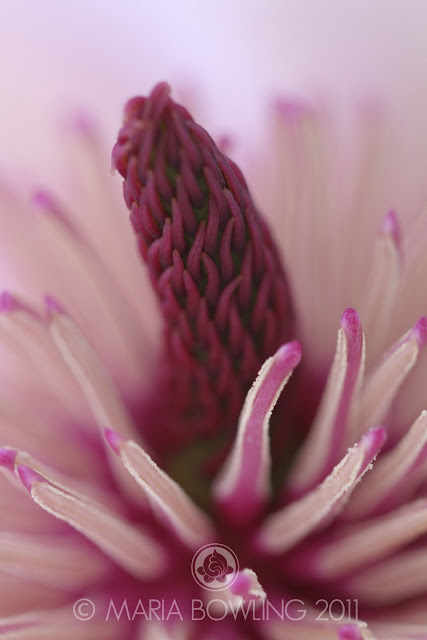 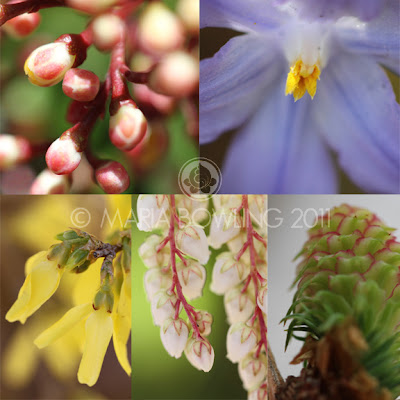 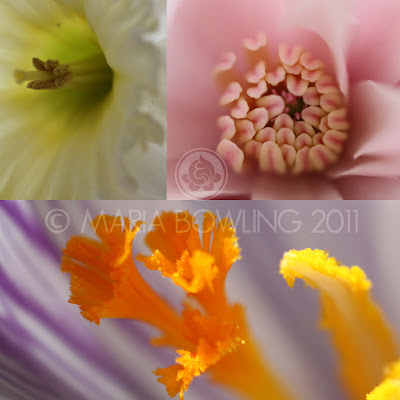 This bee in the magnolia flower (Magnolia Stellata Rosea) confirmed that Spring has arrived. This was the first flower to open on the tree! The orchid in the lower half of the picture is indoors but equally as lovely. 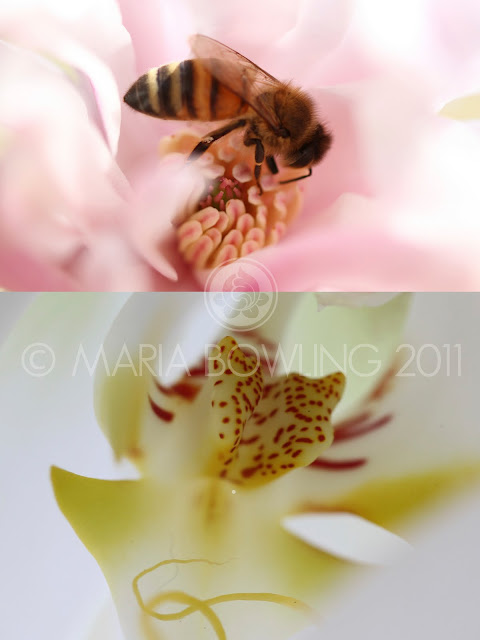 Both magnolia flowers and orchids are listed in the Chinese Materia Medica. Flos Magnoliae is known as Xin Yi Hua, there are several species of magnolia trees and flowers, they are generally grown in Henan, Anhui, Hubei and Sichuan provinces in China. Xin Yi Hua is in the herbal category of warm, acrid herbs that release the exterior, it is often used in formulas  with other herbs to unblock the nasal passages, relieve headaches and sinus conditions.
Shi Hu, Herba Dendrobii, is an orchid that is used to tonify yin. There are several species of this lovely orchid that are employed in designing formulas. 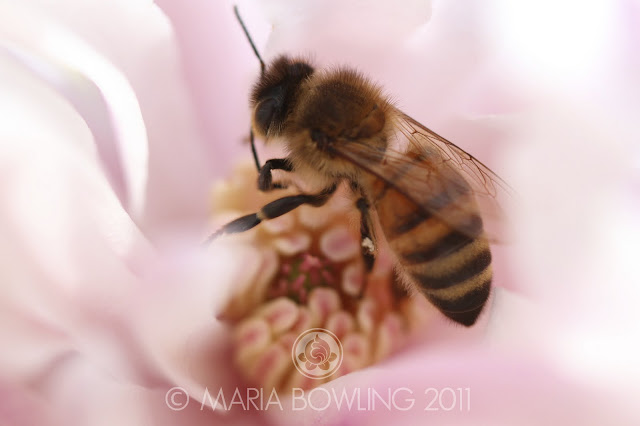 The Sweetness of Quince

These dainty quince buds graciously opened into pale coral flowers last week. They were 'forced' indoors, which means the branches were cut early. The buds opened inside after being placed in water, in a warm and sunny spot. When forced, the flowers tend to have a paler color than when they open outdoors. The species shown is Chaenomeles Speciosa-Common Flowering Quince. 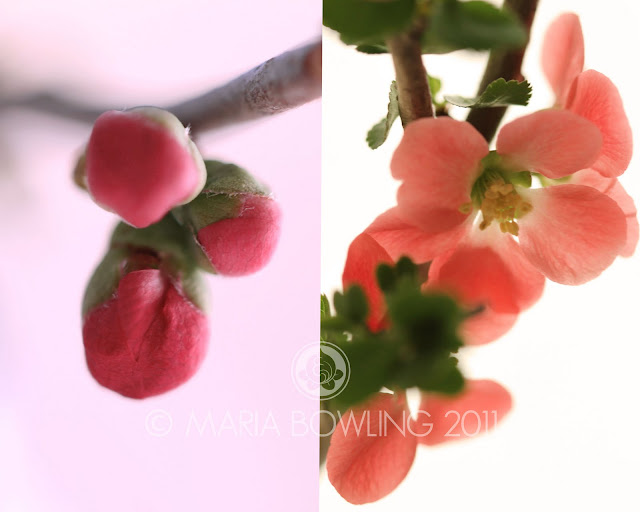 In Chinese Medicine quince is known as Mu Gua (Fructus Chaenomelis). This species grows primarily in the provinces of Anhui, Zhejiang, Hubei and Sichuan in China. The fruit is cut into pieces, dried and used in herbal preparations. It falls under the category of herbs that dispel wind-dampness. When combined with other herbs in a formula it is effective for relaxing the sinews.
The ancient Romans revered the quince fruit and included it in the banquets of marriage as it was considered a symbol of love. 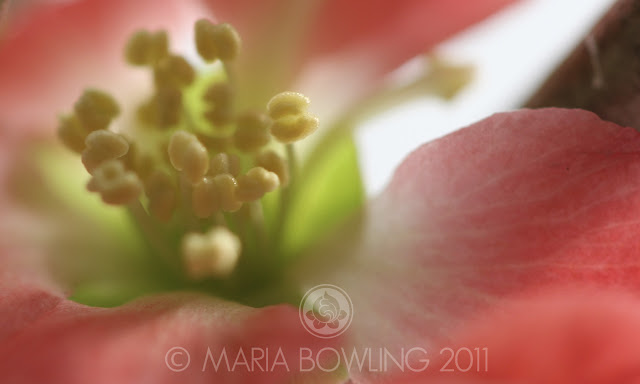 In Argentina, the origin of my mother's family,  quince fruits are made into a delicious sugary sweet paste called Dulce de Membrillo. This delicacy is served with cheese and often eaten as a dessert accompanied by strong coffee. I have fond memories of my grandmother's preciously wrapped packages of narcotically sweet,  deep orange quince paste arriving in the suitcases of family members.
Posted by Maria Bowling DACM, L.Ac., SEP, Diplomate of Oriental Medicine at Friday, April 08, 2011 1 comment:

The Magic of Witch Hazel

As it is Spring, and I am an herbalist, I would like to begin my blog with a photograph of the one of the magical plants that is waking up again for another year of growth and expansion! Welcome and enjoy! 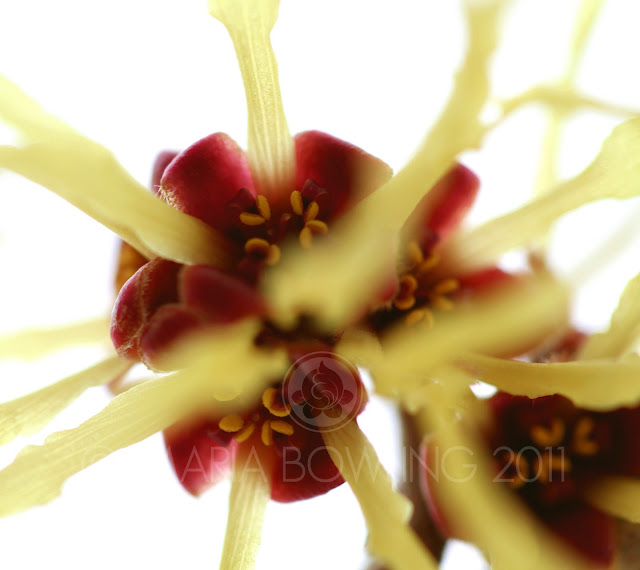 This picture is Witch Hazel (Hamamelis). It shared it's glory as one of the first flowers of Spring. Historically, this plant has been used topically for it's drying affect, to treat inflammation, and as an astringent. The leaves are distilled to make "witch hazel" and the bark is used to make tincture for external application.