The arrival of warmer weather, the promise of longer days and breezes of new beginnings come  with the unfolding of the forsythia flowers.
In Chinese herbal medicine, the fruits, known as Lian Qiao, (Fructus Forsythia Suspensae) are used in formulas for clearing heat. The fruits are traditionally harvested in the Fall, they enter the channels of the Heart, the Liver and the Gallbladder. This herb is used in formulas to clear pathogenic heat toxins and wind heat symptoms. 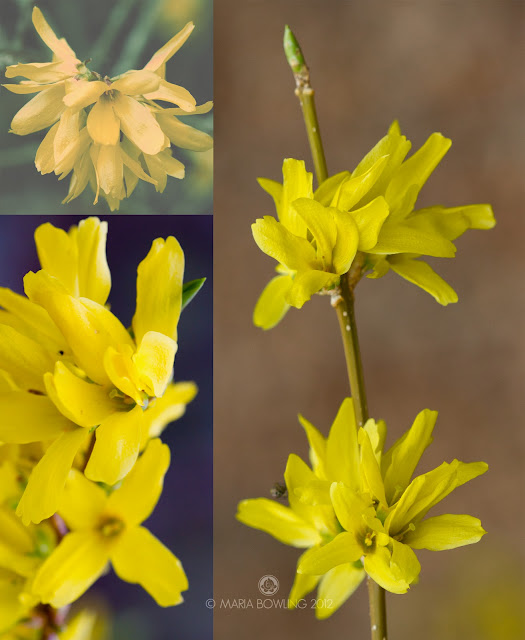 This flower is named after William Forsyth who was a Scottish botanist and a founding member of the Royal Horticultural Society. 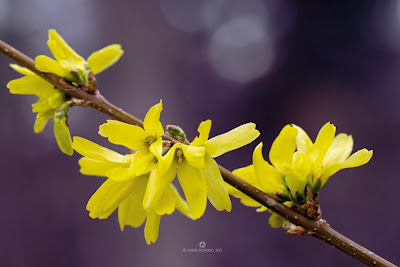 This flower is symbolic of anticipation.

I took these pictures yesterday, it was a bit overcast so the yellow of the flowers really glow, they looked magical.

During my Spring cleaning, I found this little sweet proverb that my grandmother Isabelle had saved. It is very appropriate for the season.
' Who loves a garden still his Eden keeps, perennial pleasures plants, and wholesome harvests reaps.'
Amos Bronson Alcott (1868)

Spring has brought about so many early surprises. Daffodils in bloom, bees pollinating, lightening bugs,  peony and lavender buds swelling and many unexpected bright colors.
Daffodils, also known as Narcissus come in many shades of yellow, cream and orange.
The legend and history behind the name given to these flowers is very interesting.
The ancient Greek myth of Narcissus tells us a story of a young man who was loved by the nymphs. He was the son of the river god Cephissus and the nymph Leirope. One of the adoring nymphs named Echo fell in love with Narcissus, but because he was so enamored by his own beauty, he was unable to hear the cries of his beloved Echo. The Greek gods believed that unrequited love was a crime so they punished Narcissus by forcing him to fall in love with his own refection. As a result, Narcissus was afraid of taking a drink of water from a pool because it would disturb his reflection that he had come to love so much. According to myth he died of thirst because of his vanity. According to the Roman myth, he fell into the pool because he was so in love with his reflection and the narcissus flower grew at the site of his death. 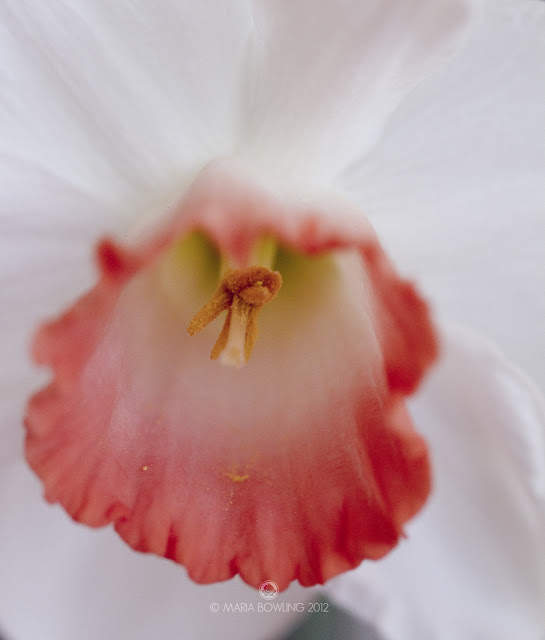 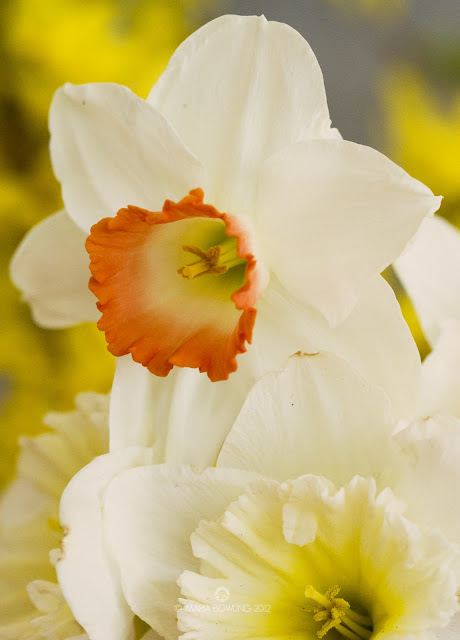 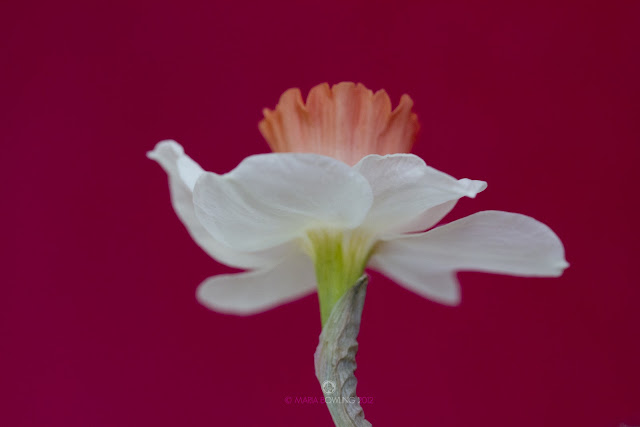 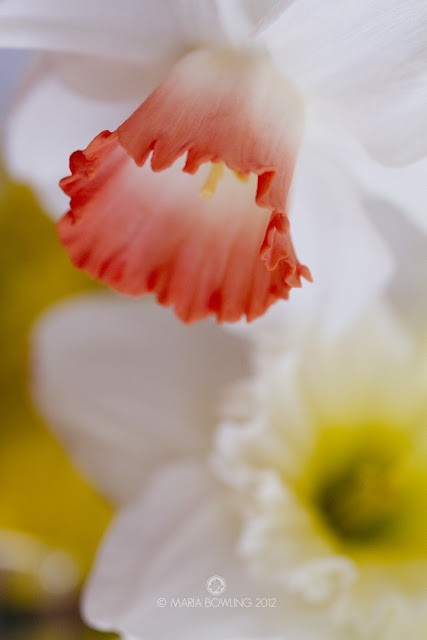 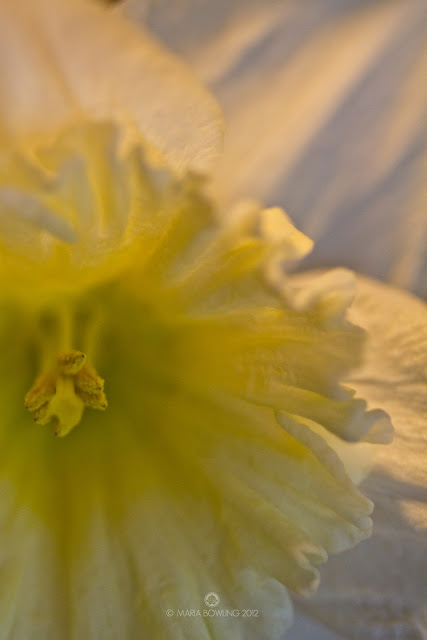 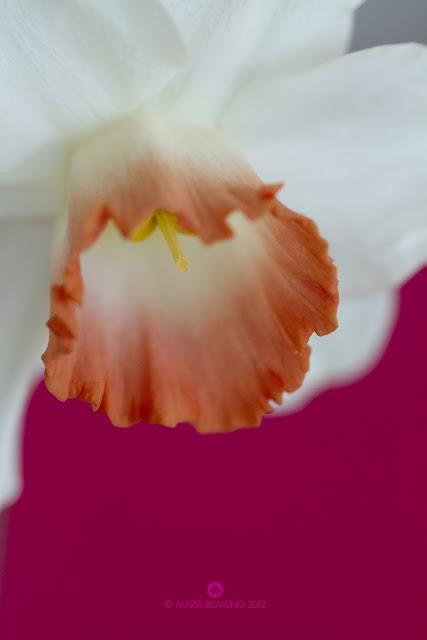 This flower was introduced to China in approximately 1,000 AD. It represents wealth and good fortune. In European lore, it represents unrequited love and rebirth. 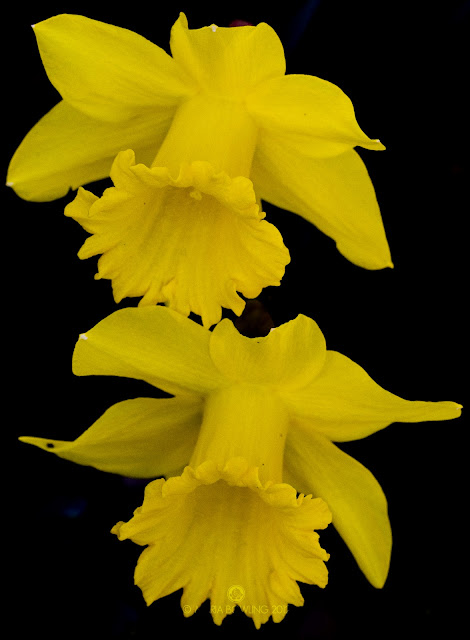 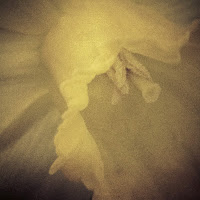 This small sweet picture of a daffodil was taken with my iPhone.

Something remarkable happened today...the Magnolia tree went into full bloom!
Last year this exact tree was in bloom on April 30th so we are seeing that the season is ahead by 40 days. This is quite unusual. I am observing many changes in the garden and plant world that I have never observed before.
Magnolias happen to be one of my favorite flowers.
This particular magnolia is called Magnolia stellata 'pink stardust'.
The very delicate buds open with the sunshine, in the morning and the late afternoon they are closed. 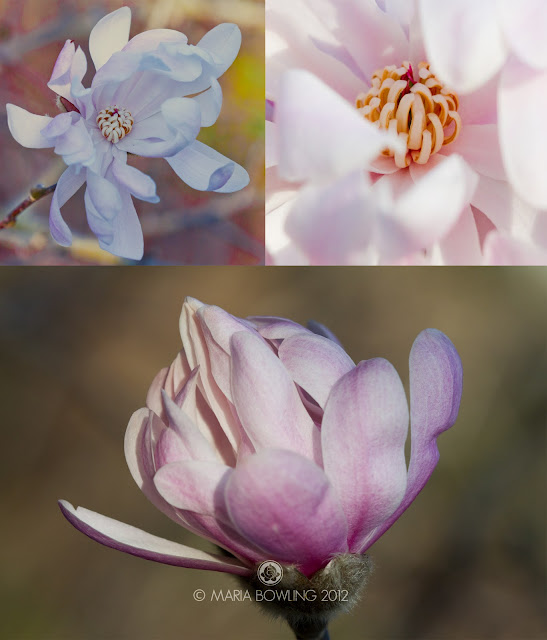 Magnolias have historically been cultivated in China. They are known as 'mu-lan'. Originally, these plants were only allowed to grow in the gardens of the Emperor.
This is a very important plant used in Chinese herbal medicine. Last year I wrote about 'huo-po' and it's uses and category in the medicine. 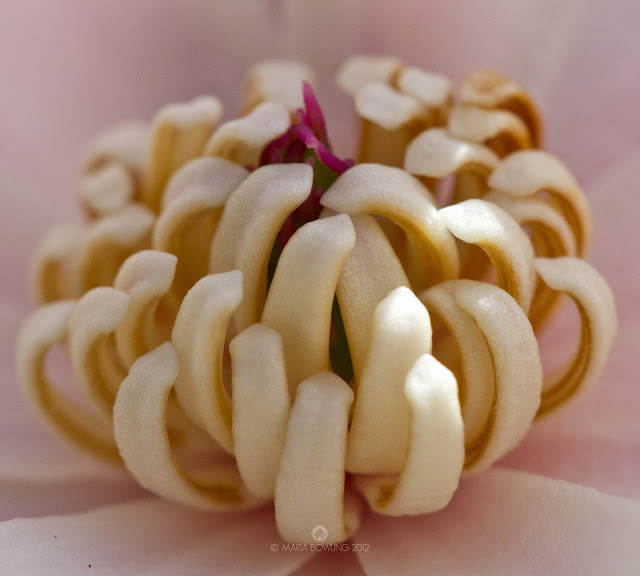 These flowers are symbolic of sweetness and beauty. The blossoms symbolize a beautiful woman. 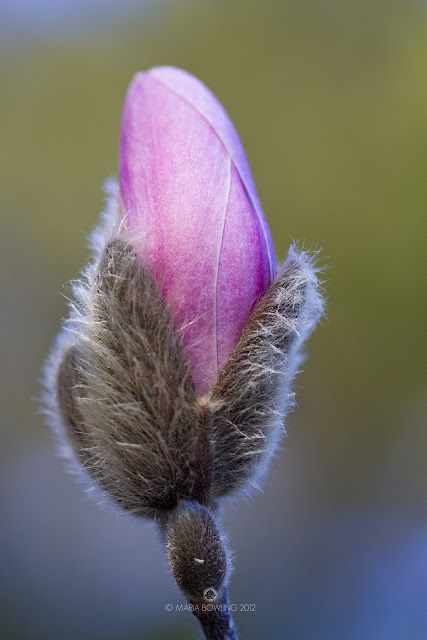 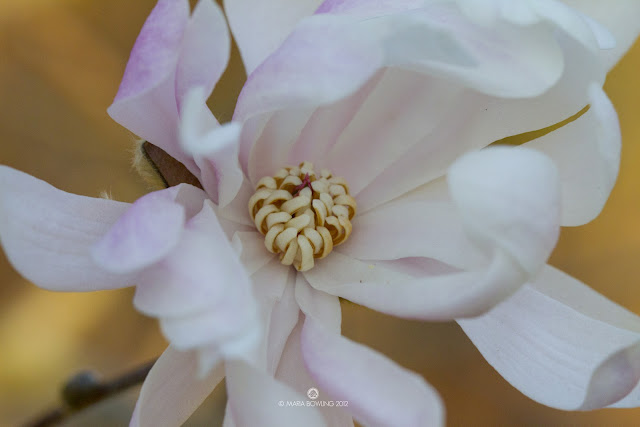 According to legend, magnolias symbolize the recovery of what has been lost. They also carry a scent that is believed to open psychic abilities.
In my experience of photographing magnolia flowers, I feel that they are symbolic of our fragile nature. It takes very little movement from the wind or added intensity from the sun to bruise the petals of the flowers. These delicate petals will turn brown once they are affected by natural extremes and the flower will quickly weaken.  I see these flowers as very delicate reminders of our pure nature.
Posted by Maria Bowling DACM, L.Ac., SEP, Diplomate of Oriental Medicine at Tuesday, March 20, 2012 No comments:

Recently, I allowed a beautiful bouquet of tulips to dry. As I watched them fade and change shape,  I saw the most beautiful forms arise from the flowers. I decided to photograph them and play with the natural lines and individual expression of each flower. 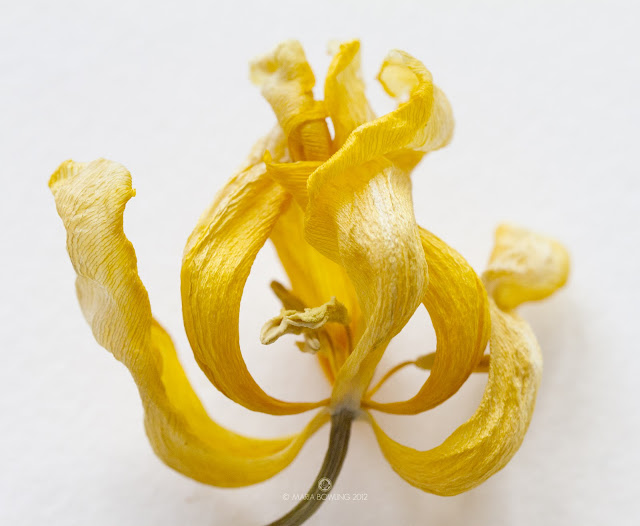 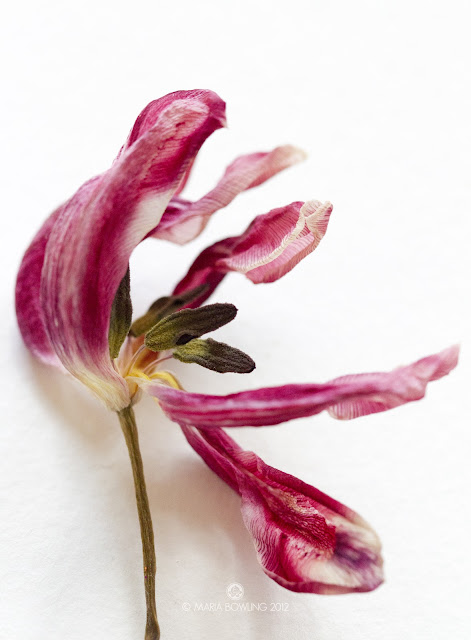 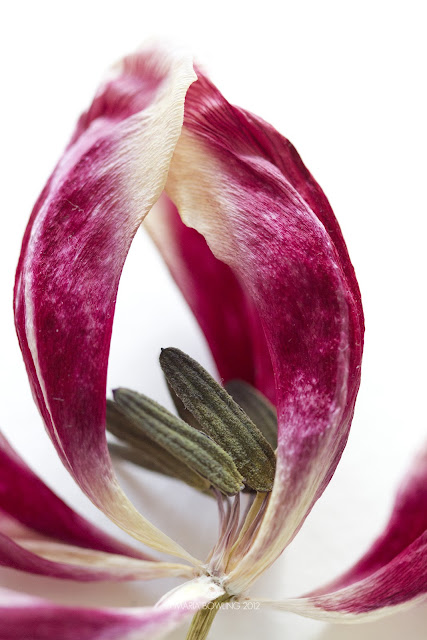 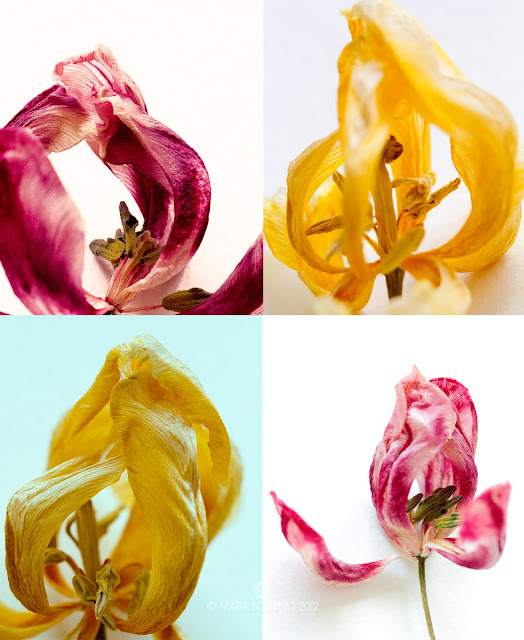 I have also been recently inspired by the photographs of Richard Fischer. While I was in Spain for the holidays,  I was gifted a book of his photographs of flowers by my cousins. The book was published by Edition Panorama Bibliothek. The portraits of individual flowers are absolutely gorgeous. It is an unusual book that lives in a sleeve with a picture of orange poppies! His website is www.richardfischer.org.

The Crocus and Saffron 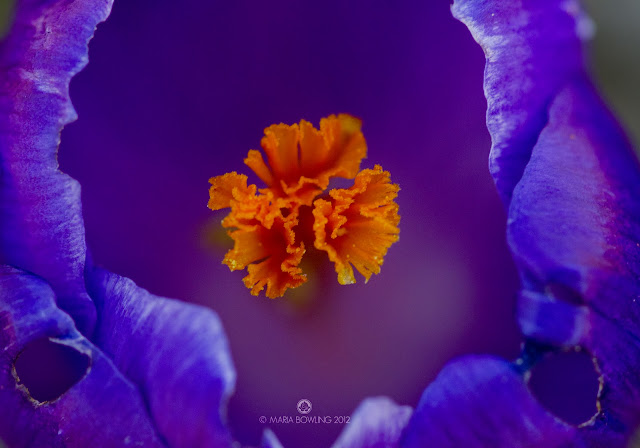 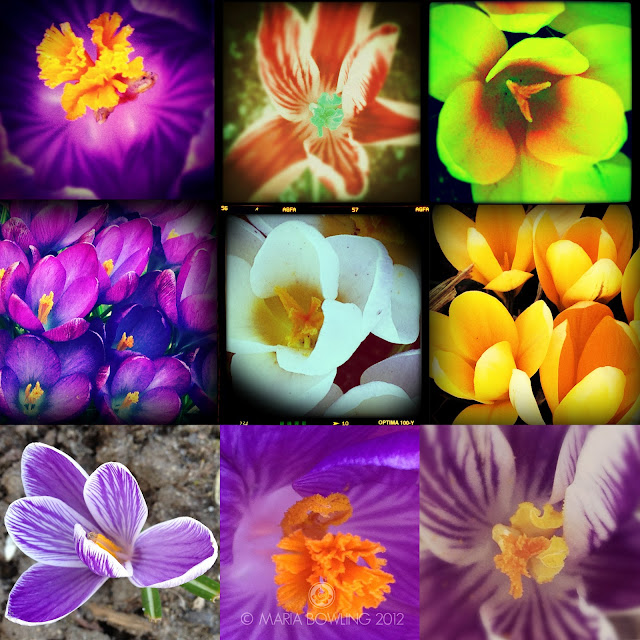 Crocuses or Croci, are a genus in the iris family. While they were originally documented on the island of Crete, they were introduced to central Europe in the mid 1500's and are now native to woodlands in many parts of the world. They have precious small bulbs that are called corns. 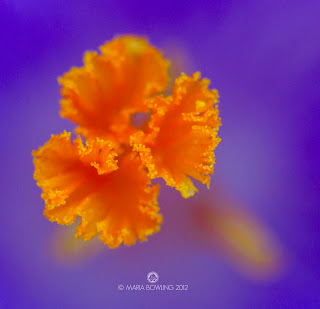 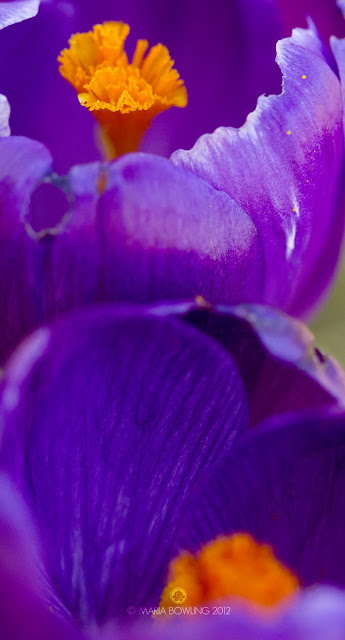 Crocus sativus is the type of crocus that gives us the magic of saffron. This precious spice was originally used to dye the garments of women of a very high status and priestesses in Crete. These flowers were considered sacred and associated with Eos or Arora in classsical antiquity. During the middle ages, croci were symbols of the trinity.

In my mother's kitchen saffron was the most cherished spice, it was used to make paella, a traditional Spanish seafood dish. It was also used for seasoning seafood soups.

I have have recently begun working with saffron in my perfumes, it is a rich deep orange treasure that gives perfumes a very earthy and unique scent. It is very potent so only a small amount is needed as a top note. The scent is warm, musky, aromatic and spicy, the oil is made from the dried stigmata.

In Chinese herbal medicine, this herb is known as Fan Hong Hua, it is prescribed in formulas for invigorating blood and removing stagnation. It is such a precious remedy because it takes 75,000 flowers to make one pound of saffron!

According to Greek mythology, there are various myths around the legend of Krokus. One such myth is that after his love affair with Smilax, he was turned into a plant by the Gods!

These pictures were taken this week. These beautiful flowers are symbols of resurrection, cheerfulness, and preciousness. The petals are so delicate and beautiful. Having the opportunity to photograph them is such a treat. They are always the welcoming flowers of Spring.

Persimmons are so beautiful. The orange of these winter fruits begged to be celebrated and photographed. They are also known as date-palms or Chinese figs. The pinyin word for Persimmon is 'shi' which also translates as 'affairs or matters'. According to Chinese symbolism, along side a mandarine orange these fruits together symbolize the following sentiment.... 'May you have good fortune in all your undertakings.' 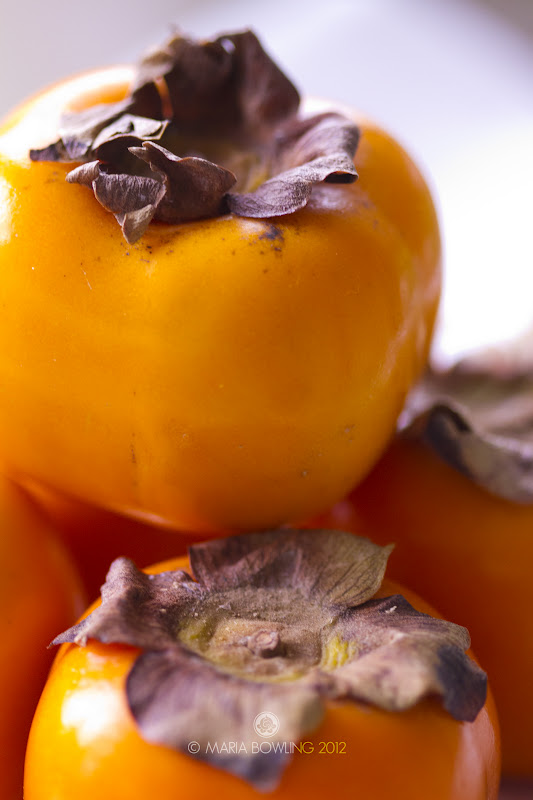 Persimmon trees are often planted in temple gardens because there is a belief that the tree is symbolic of four virtues: long life, shade, homes for birds and do not harbor pests.
These fruits are sweet and cooling in nature, they moisten the lungs and resolve phlegm, in Chinese medicine this fruit treats hot and or dry conditions. The calyx (botanical name is Calyx Kaki) of the fruit is used to treat rebellious qi of the Stomach.
Fresh persimmons have phyto-nutrients and anti-oxidants like catechins and gallocatechins. They are also very high in vitamin C.
I just learned that in Buddhism, persimmons are symbols of transformation. Six persimmon fruits are symbols of enlightenment. The symbolism reveals that green persimmons are acrid and bitter in their immature state, they represent ignorance. As the fruit matures, it becomes sweet and represents wisdom that comes after transformation. 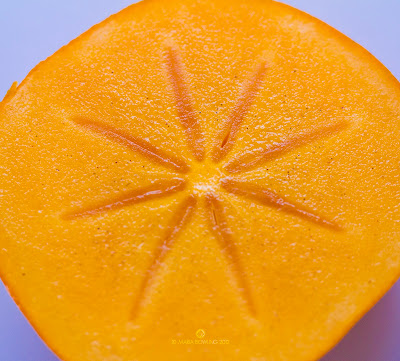 This picture is of a persimmon cut horizontally, it is so beautiful, I was surprised to find a star inside!

The winner of the gift of the magic box was a very sparkly woman from Montauk, N.Y., a hop, skip and a jump from this neck of the woods....
Posted by Maria Bowling DACM, L.Ac., SEP, Diplomate of Oriental Medicine at Monday, March 05, 2012 4 comments:

In the past few weeks so many amazing and beautiful gifts have come to me....a beautiful perfume bottle, beeswax from Hawaii, a pink glass rose, a piece of jewelry, fresh tulips and a very beautiful card from a far away land.
It is my turn to give a gift...
In celebration of Spring (almost)....I am giving a away a box full of glittery goodness. It is a former match box that I decorated inside and out. There are many treasures inside and I am including a perfume sample of my latest solid perfume of Rose Chypre.
The fifth person to email me at mariabowling@me.com will get the gift in the mail. Where in the world will it go? 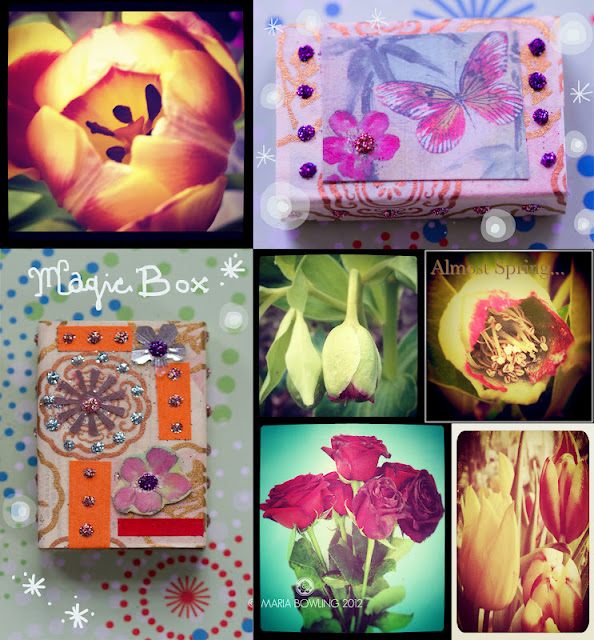 All of the floral pictures were taken recently with my iPhone.