The day that I left for Spain, a group of Eastern Blue Birds (scientific name Sialia sialis) magically appeared to drink water from the bird baths. I had never seen Blue Birds before so it was quite moving on many levels to see such gorgeous birds appear out of no where.
These beautiful birds have appeared several times in one month.

Their feathers are a very deep blue, the color was almost electric in comparison to the grayness of the afternoon sky. I was stunned by their beauty. 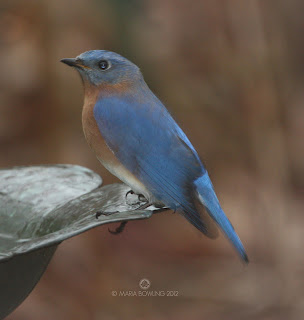 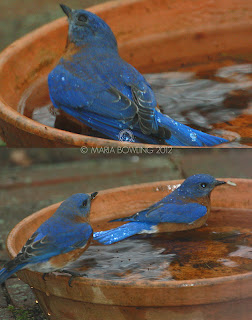 I have since discovered that Blue Birds were on the verge of extinction in the 1960's. They are said to be making a come back in population. These gorgeous birds live on the edges of fields, pastures and grasslands. The eggs of Blue Birds are also blue!

During this third visit, the Blue Birds shared the bath with Purple Finches.

I considered the appearance of these magical and breathtaking birds to be a true blessing.
Posted by Maria Bowling DACM, L.Ac., SEP, Diplomate of Oriental Medicine at Monday, January 09, 2012